“I’m here to entertain you”. A phrase that every attendee of a sell-out concert would love to hear at the start of the night! So it makes sense that Ed Sheeran carried this phrase all the way from Madison Square Garden in New York a few weeks ago, to The O2 in London this past Sunday night.

This one-man show, which many would imagine could only excel in a smaller, more intimate surrounding, surpassed expectations. With his collection of guitars and a simple loop pedal, Ed Sheeran took his 20,000 fans on a journey through his 7 year career with a focus on getting his crowd to ‘Sing’ throughout the concert and all the way home!

The Suffolk-born singer-songwriter kept his fans waiting until the end for his best-selling hits ‘The A-Team’ and ‘Sing’, but with continuous crowd involvement, fantastic guitar skills, East Anglian rapping and a few surprises in store, he certainly entertained.

He opened with a few hits from his latest album ‘X’, with the highlight for many being his crowd pleasing ‘Bloodstream’, which felt more like you were at a hip hop gig with the echoes of hand clapping and the bouncing of hands in the air. As well as this, the recent release of his wedding-related music video, ‘Thinking Out Loud’, clearly earned its supporters, as the arena was full of swaying couples and mobile lights and lighters.

Moving back towards his original studio produced album ‘+’, ‘Lego House’ was one of the first songs in the set list which encompassed the whole of Ed’s very own entourage of singing fans, with images of Lego blocks and Rupert Grint-related pictures (who featured in the music video) on the large screens above him. He also knew how to quieten a crowd with his rendition of ‘Give Me Love’, where he asked all fans to sing quietly and then louder and louder as the song developed.

It was not just the music fans that were satisfied but also the film fanatics as he performed his record ‘I See Fire’, which was produced for the second instalment of ‘The Hobbit Trilogy’. With clips from the film on the screens above and Mr Sheeran’s explosive vocals, this track in particular, had music and film fans singing the chorus at the tops of their voices.

It was not just his endless list of sing-a-long tracks, his unrivalled ‘shredding’ on his acoustic guitar, nor his surprise incorporation of boy band and R&B classics like ‘Everybody (Backstreet’s Back)’ and ‘No Diggity’ within his songs that won over the entire crowd of Sunday 12th October, but also his natural and un-pretentious attitude on stage. He paid homage to his upbringing and his pre-signed YouTube days and showed us all how he is in the spotlight today for humbly doing something he loves, ultimately encouraging us all to simply just ‘Sing!’. 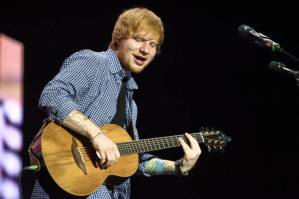 Incredible Guitar Skills and a performer that really got his fans to “SING!”

Published on listen.com/current/blog/ on 14th October 2014