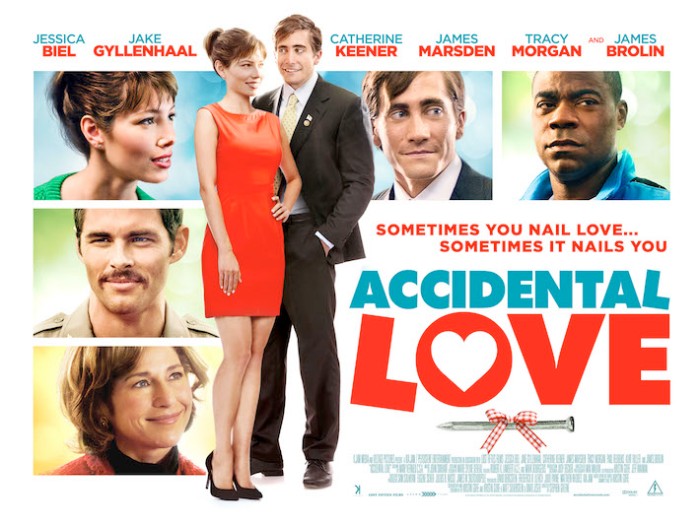 Jake Gyllenhaal takes a break from his dark and complex thriller work, of late, to try his luck at a bizarre comedy romance which has crept under the radar this year. Originally shot by David O. Russell in 2008 before his Oscar-winning SILVER LININGS PLAYBOOK, the formally titled NAILED experienced complications during filming and as a result it was never completed. Instead, the footage was purchased and an editor paid to put it all together in an effort to make something as coherent as possible. This could explain the lack of promotion around a title featuring two well-known actors in Gyllenhaal and leading lady Jessica Biel, not forgetting a seriously strong supporting cast.

During her dinner proposal at the best restaurant in town, Alice Eckle (Biel), accidentally gets a nail lodged in her head and is rushed to hospital. With no credible healthcare she is refused the necessary treatment resulting in Alice with a nail in her head for life or until it becomes an ‘emergency case’. The nail causes unorthodox behaviour, leaving her housebound and crazier than ever. After seeing the young, handsome and clueless senator Howard Birdwell (Gyllenhaal) on TV campaigning and promising change for people with problems, she travels to Washington to convince him to push through the “Catastrophic Care Bill” which gives families, who do not have insurance, the health care necessary in times of any emergency, no matter how big or small.

Howard is a freshman who has been forced into his role, and controlled by many superiors, including Representative Pam Hendrickson (Catherine Keener), a famous female astronaut, whose military moon base is not getting the funding or promotion she wants. She orders him to use somebody who’s manageable and controllable to endorse and publically plead for her moon base to be built.

Alice becomes the senator’s right hand woman, helping him promote the moon base while he promises to push through her health care bill. With an unpredictable lifestyle, a sense of morals and an evident crush on the senator, will this arrangement go to plan? 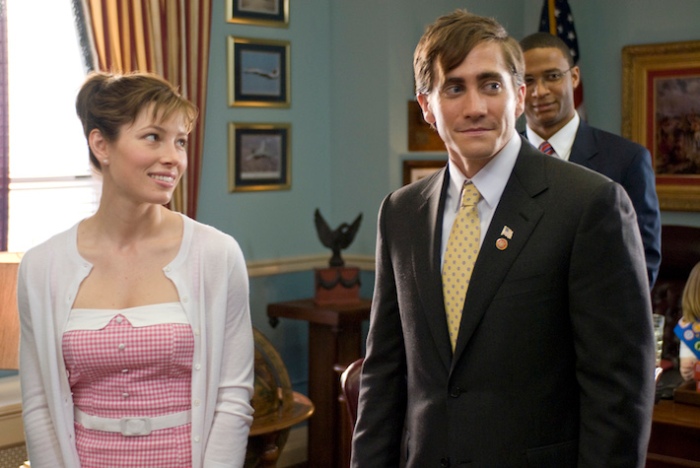 It is safe to say that Jessica Biel has found herself in a few playful comedies in the past, such as I NOW PRONOUNCE YOU CHUCK & LARRY and PLAYING FOR KEEPS, so it is not surprising to see her in a such a strange role. However, she does it justice and acts well as a “crazy woman” with a nail lodged in her head. Gyllenhaal on the other hand is acting well out of his comfort zone, the levels of stupidity seen actually bring us back to the early years of BUBBLE BOY. Both actors do their jobs well, but unfortunately, that is all that seems to work on this occasion.

The story is simply so strange that I just struggled to come to grips with it throughout the 100 minutes. The fact that the film was pieced together by a hired editor shows, with the feature jumping from scene to scene without any real flow. O. Russell’s message in regards to the absurdity of the US political heath care system well as truly lost.

The cast supporting the two leads isn’t great either, with Tracy Morgan once again trying too hard to make the audience laugh, tying in the usual racial comedy with his over-eccentric acting style. Although James Marsden has a few funny moments in this film, he doesn’t draw any parallels with his comical genius in DEATH AT A FUNERAL and ANCHORMAN 2: THE LEGEND CONTINUES. In addition to these, the likes of Catherine Keener, Kurt Fuller and Malinda Williams all disappoint, with a young Olivia Crocicchia playing the most irritating character. The only thing this film leaves you wishing is that the brilliant Bill Hader would have had a larger part in the film.

Overall, ACCIDENTAL LOVE is a playful attempt at a senator and citizen love story gone wrong. It is not one I could recommend. As a huge Jake Gyllenhaal fan, I will be trying to act as if this film never existed and look forward to boxing drama SOUTHPAW coming later this year. 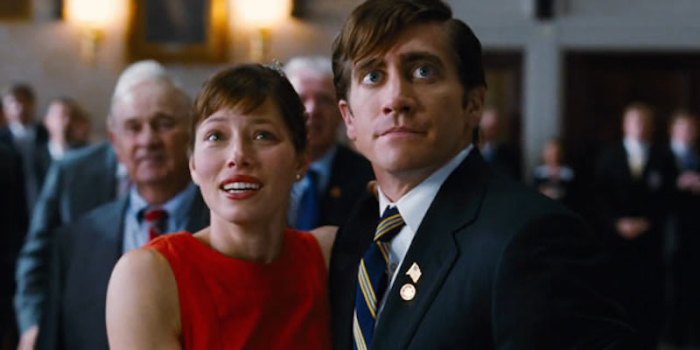 Recommendation: Do not spend any money on this film! That is all.

Originally written for Screen Relish (http://www.screenrelish.com/). Thanks to them for the opportunity to write this piece.